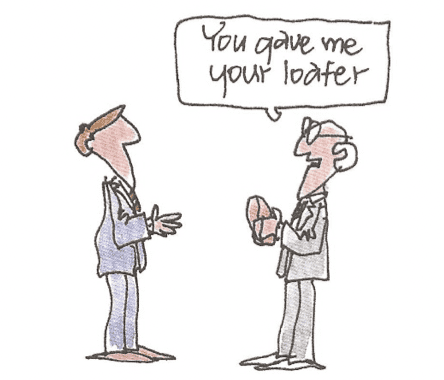 When I was a new believer, I have to admit I stuck to reading the New Testament only. The “these” and “thous” of the Old Testament were not only confusing but downright intimidating to me. But as I continued to read and study this first half of the Bible, I have to admit, I’ve discovered some amazing and incredibly inspiring stories. Some of these deal with kings, queens and prophets, but a lot of them deal with normal, ordinary people just like you and me. One of the best of these stories concerns a young girl named Ruth. Her book is right after the Book of Judges and right before First Samuel.

A beautiful story of love, loyalty, and redemption all in four short chapters! But here are a few little-known facts about this story that will help you get some background.

1. This wonderful story filled with love and hope takes place in one of the darkest times of Israel’s history- the period of the Judges where there was no king and everyone did what was right in their own eyes. During this period people worshipped pagan gods, sacrificed their children and lived lives of uncontrolled sinfulness. But in the middle of this dark time God showed up. The book of Ruth gives us a glimpse into the lives of a couple of righteous God-fearing people- Ruth and Boaz. It’s as if their light shines even brighter against the dark background of lawlessness and idolatry that was going on in their nation at the time.

2. When Ruth and her mother-in-law Naomi returned to Israel after the death of their two husbands, they were left penniless. During this time in Israel’s history very little provision had been made for widows and orphans. Often a woman with no means of support would have to sell herself as a slave or worse- a prostitute. Ruth and Naomi could easily have starved to death having no family members to support them, but God had created a provision for the poor hundreds of years before. When a landowner harvested their field, God had instructed them to leave the corners untouched. In other words, they weren’t to harvest the entire field. They needed to leave some of the crops for the poor to gather or “glean”. So, every day Ruth went into Boaz’s field and gleaned from the corners thus supplying Naomi and herself with food. It was there in the field that Boaz discovered Ruth.

3. When Boaz discovers Ruth and falls in love with her, he realizes she’s a distant relative through marriage of Naomi’s family and it’s actually his duty to care for her. This is another provision God made way back when. If a woman’s husband died, the man’s brother or closest relative was to take the woman and marry her. That way the deceased man’s widow and children would be cared for, and the deceased husband’s heritage would continue. This was called being a “Kinsman-Redeemer” –Kinsman because the person is a relative and Redeemer because they’re helping restore not only the widow but the family’s legacy. Israel- God’s people were to be different from the neighboring countries. God had created this provision back when Moses was leading the Israelites out of Egypt (Deuteronomy 25:5-10).

4. There was one glitch though. In our story Boaz discovered that there was a relative of Ruth’s who was nearer than Boaz. So, he had to meet with this relative and offer him Ruth’s land, Ruth and Naomi. When the relative refused to take these responsibilities on, Boaz was free to marry Ruth.

When Boaz makes the agreement with the relative, the relative takes off his sandal and hands it to Boaz to seal the arrangement This was the custom at the time to show an agreement had been made and the unnamed relative is giving up his right to the property (and the women). Many people believe the sandal represented ownership and may have even gone back to the time of Joshua when God told him to walk- march through the land for “wherever the soul of your foot treads shall be yours.” This may have been the beginning of the sandal pass ritual that became a habit in Israel.

5.  The story of Ruth is such an incredible example of redemption- God restoring things and people who seemed at a dead end and hopeless. The story starts out with Naomi and Ruth losing their husbands and returning to Israel with nothing- no family, no money and no support. And worse yet, Ruth wasn’t even one of the “chosen ones”- God’s people, the Jews. She was from the neighboring country of Moab. But God had a plan. He wanted to restore and bless Ruth far beyond what she could ever ask or imagine. Even though the Jewish people weren’t really supposed to marry non-Jews Ruth had decided to follow the Living God, so Boaz was able to marry her. God blessed their union and even placed Ruth into the lineage of King David (Ruth 4:21). And as a result, she was also included in the lineage of King Jesus too (Matthew 1:5-6, 16)!

6. Boaz took the role of Kinsman-Redeemer, taking Ruth “under his wing” and caring for her. This act foreshadowed what Jesus would do for us hundreds of years later. Jesus is our Kinsman Redeemer- our Kinsman because He became a human just like us and Redeemer because He went to the cross to take on himself the punishment for our sins. So not only did God bring redemption to Ruth in this amazing story, but in it He painted a beautiful picture of our redemption through His Son (and Ruth’s ancestor) Jesus.

Why did God bless and redeem Ruth in this beautiful account? Mostly because of His unmerited and unearned grace but Ruth also put herself in the position to be blessed by God. By taking a huge risk and leaving her family, city, and the only life she’d ever known Ruth was putting herself totally into God’s hands. 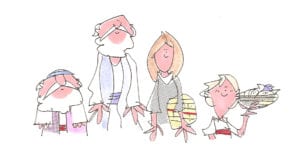 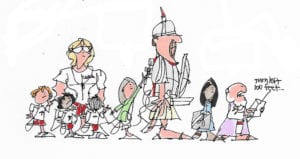 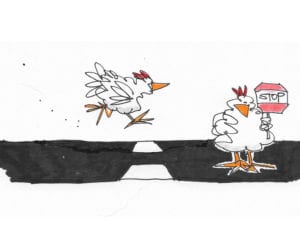 Sandy Silverthorne is a children’s illustrator and author; whose mission is to help parents and grandparents discover fun Bible stories and Bible lessons to share with the kids in their lives. His goal is to make God’s Word come alive and be easy to understand for kids. And since God loves to laugh, Sandy’s also created 3 hilarious joke books for kids with more coming all the time. And check out his animated Bible lessons for kids on his YouTube channel. So glad you decided to visit!

Want something fun arriving in your inbox? Subscribe to my newsletter for the latest on new books, free content and fun activities. 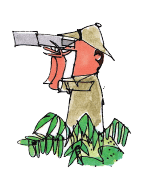 Subscribe to receive "101 Things to Do When You're Bored"